Xem danh sách cửa hàng tại đây
Mô tả
Microlab is currently only searching for its vector at the wireless audio devices’ market. At different times we had absolutely different devices with Bluetooth at our editorial office: a multi-function bed-side Microlab MD310 BT, desk top two-component Microlab H30 BT. Today, we have received a device from new product line, Microlab T5, which is maximally similar to those compact systems which we usually test in our "Decorative Audio Devices" section.

There is only a pair of logos on the silvery box and a promising slogan “Biggest little speaker”. A fascinating antithesis, which, as we be assured later on, has the right to be. Along with the audio device comes the Manual, 3.5 mm TRS cable and charging device (5 V, 4 A). We would like to draw your attention to the fact that not a standard, for such cases, Micro-USB connector is used, but a coaxial one. The Microlab T wireless speakers product line includes eight different, not same-looking devices. T5 Model, being the third one from the bottom of the product line, features no bright designers’ solutions. The case of T5 is made by two banded parts made of aluminum of over one millimeter thickness.

By touch, the anodized aluminum has no difference at all from that used, for example, in some table PCs. It can become covered by scratches from sharp objects, for example, if the device is put into a bag with door keys.

The lines of sight from the back and from the front differ only by the fact that in the second case, thin outdents of white LED indicators can be seen from the top. Little holes in the aluminum form an interesting, non-trivial picture. All not numerous connections are closely positioned at the right edge: 3.5-mm TRS connector and a coaxial connector for recharging with an orange indicator which lightens when the device is charged. And it goes off when the recharging process is over.

The two thin lines on the top are symmetrical white LED indicators. Between them, the control buttons are located: playback/interface via Bluetooth, previous/ext track, power off, volume decrease/increase and sound muting. The buttons have no backlight and are indicated without due contrast, and in some situations it would be difficult to distinguish them.

At the bottom, two rubber legs are glued to the case, and the surface on which it is located will not be scratched by the aluminum case. The deign of Microlab T5, in general, is quite simple, and the speaker only attracts attention by plentitude of metal in the case. On the one hand, that increases the strength and reliability of the device. From the other hand, that seriously prevents the portable scenarios of use: such a weight can be fairly felt. The audio device will perfectly fit in a minimalistic Hi-Tech style interior.

We have conducted the measurements of Microlab T5 Amplitude-Frequency Response: The Microlab T5 AFR Graph is not very cut before 3 kHz, and further more significant variations are present. The lower bound of the reproduced range, principally, corresponds to the declared specification. Now we measure the maximum volume pressure:

Nominally, Microlab turned out to be louder than all of previously measured speakers. The difference can also be appreciated by ears. As to the distance, the portable speaker has problems with that. The failures in playback begin at the 7-8 m distance, and that is to little for such class of devices.

By the sound reproduced, Microlab T5 is very similar to our reference Creative Sound Blaster Roar. Both devices have no significant failures in the reproduced range, have good detail in the middle register, and the level of sound openness (although Microlab has a greater one). But there are nuances too. Sound Blaster Roar has the feature of a more heavy bass and a great inclination to the lower register. Microlab, on the contrary, has the accent at the transition segment, between the middle and the upper one. Also, in the sound of the device, the attack of stringed instrument can be heard brightly, but the punch is reproduced poorly. The difference in the sound can be appreciated in the best way in compositions with a little number of instruments.

We would also like to mention that in case of wired connection, as distinct from many competitors, Microlab T5 produces no noise. Thanks to relatively simple design of the speaker, the position of the speaker have practically no effect on its sound.

For tests in autonomous mode, we saw fit to adjust the volume of Microlab T5 at the middle level: 15 scales of 30. That is quite enough for a middle-size room. 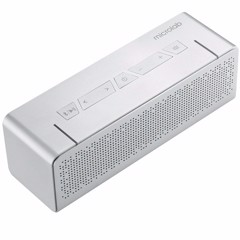